Organic Food Demand in the UK is Trending Higher

The continued rise in demand for organic food remains robust over the pond. Supermarkets in the UK have seen a robust rise in organic food sales with organic food and drink sales rising 18.7% year over year for the first 5-months of the year according to data from Nielsen. Most of the gains in the space have been driven by Organic spreads and preserves from vegetables and fruits which are up more than 18% year over year. Organic beef sales are up 15.3% year over year while organic egg sales in the UK are up by approximately 15% year over year.

In what can only be viewed as disappointing, the USDA reported that in a recent report of an Oregon livestock auction, organic cull cows sold for less than several conventional cows. According to the Agricultural Marketing Service, the average price for the top 10 organic cows auctioned was $52.95 per hundredweight, compared to an average price of $65.61 per hundredweight for the top 10 conventional cows auctioned. What this shows is that while the demand for organic dairy continues to be robust at the retail level, on the wholesale side of the ledger the demand remains soft. Organic milk prices relative to conventional remains strong approximately 19% above the 2-year average of the spread between retail organic milk prices and retail conventional milk prices. 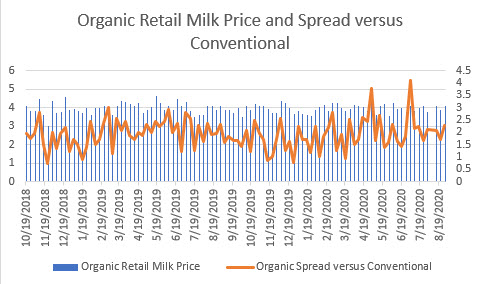