China has lodged a complaint against the U.S. at the World Trade Organization (WTO) over U.S. import duties, the Chinese Commerce Ministry said on Monday. This makes the third such case lodged by China at the WTO. A finding in China’s favor — which could take years — would allow China to respond legally with its own tariffs (which it has already done, without WTO approval).

New U.S. tariffs on clothing and other imports from China went into effect on Sunday, escalating the trade war in a move expected to hit consumers squarely. The Trump administration previously had 25% tariffs on $250 billion worth of goods imported from China. On Sunday, 15% tariffs on an additional $300 billion worth of goods went into effect. On Oct. 1, the 25% tariffs will rise to 30%, with exceptions for some products, mainly consumer electronics. The U.S. Trade Representative’s Office said it would collect public comments through Sept. 20 on a planned tariff increase to 30% on a $250 billion list of goods already hit with a 25% tariff set for Oct. 1. On Dec. 15, exceptions will expire, and that rate will become 30% across the board.

China’s retaliation took effect as of 12:01 p.m. Sunday in Beijing, with higher tariffs being rolled out in stages on a total of about $75 billion of U.S. goods. Higher Chinese duties that took effect Sept. 1 include an extra 10% on American pork, beef, and chicken, and various other agricultural goods, while soybeans will get hit with an extra 5% tariff on top of the existing 25%. Starting in mid-December, American wheat, sorghum, and cotton will also get a further 10% tariff. While China imposed a new 5% levy on U.S. crude oil starting from September, there was no new tariff on liquefied natural gas. The resumption of a suspended extra 25% duty on U.S. cars will resume Dec. 15, with another 10% on top for some vehicles. With existing general duties on autos taken into account, the total tariff charged on U.S.-made cars would be as high as 50%.

President Trump said late Friday he couldn’t say if he would speak to Chinese President Xi Jinping over the weekend. China’s Ministry of Commerce said Beijing and Washington remain “in effective communication” about their continuing trade dispute.

Face-to-face talks between Chinese and American trade negotiators scheduled for Washington in September are still happening “as of now,” Trump told reporters Friday before going to Camp David, the U.S. presidential retreat. However, September talks may have hit a roadblock as Chinese officials have complicated schedules ahead of Oct. 1 celebrations of 70 years of the founding of the PRC. Reports have surfaced that Liu He (China’s top negotiator) and his team had planned to visit the U.S. the week of Sept. 16, but talks could come before the 16th or not until October. 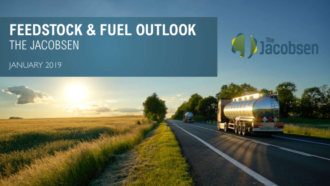 WHY ARE PETROLEUM REFINERIES RESTRUCTURING?

To illustrate the historical, present and future for the applicable renewable fuel feedstock markets globally with a specific focus on the impact of the growth in renewable fuel demand in North America. In the study, The Jacobsen examines how the increase in demand for the lowest carbon intensity feedstocks will impact the value of those feedstocks and how those changes will impact the demand in traditional end-use markets.

We are excited to announce that we have acquired @thejake1865, expanding and strengthening our agriculture business and bringing new insights and capabilities to our customers. ...Learn more: http://spr.ly/6019HddQb