Organic soybean prices remain stable but elevated hovering near the $19 handle ahead of the harvest. There is some fear that organic soybean prices could continue to edge higher if the harvest continues to be delayed. There is very little crushing occurring. The lack of available soybeans has led to a dearth of soybean oil. Prices are seen near $0.60 per pound in Baltimore for imports and approximately $0.63 in the eastern Midwest.

The Jacobsen forecast that organic soybean prices will ease slightly and average close to $18.40 for the year. This is basically unchanged year over year according to historical data collected by The Jacobsen. The seasonality is incorporated into the organic soybean (The Jacobsen picked up at the farm in the mid-west) forward curve. 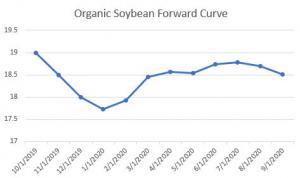