Organic corn prices remain subdued and there is a good reason. Organic corn imports into the United States surged in October, well beyond The Jacobsen’s initial forecasts. Imports of organic corn rose by 43K metric tons, nearly 3-times the 15.5K metric tons projected by the Jacobsen. Nearly 38K tons of organic corn shipped to the US came from Argentina. The Jacobsen does not know the actual dates, and therefore the 15K tons projected to arrive in November could have been unloaded in late October. Still, the number is very impressive and provides a good reason why organic corn prices have remained subdued near $8.25 picked up at the farm in the mid-west. 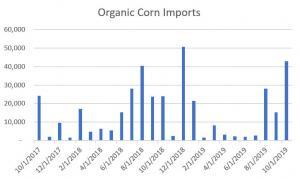 Thoughts from the Frontlines of the Low Carbon Fuel Revolution