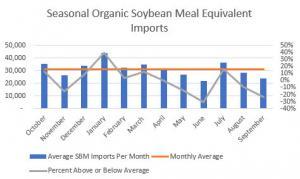 The seasonal statistics make the beginning of the q1 a very important period for market participants. There is word from merchandisers that a larger than normal volume of 46 protein soybean meal is making its way to the US just at a time when prices are beginning to move higher. The organic soybean harvest in the US was less than ideal with wet, dirty beans showing up at feed mills and merchandiser storage facilities. Prices are currently near 715 per metric ton FOB India. The Jacobsen has heard prices up to 800 per metric ton delivered into south-central PA.