A rise in imports was expected, but the increase to nearly 33K tons was much greater than the 19K tons that were imported into the US in 2019. This figure was equal to the amount imported in 2018. On a year over year basis, for the 019/2020 season, organic cracked corn that is imported into the US is up 12%. This will likely continue to generate a headwind for organic whole corn prices which are hovering near the $8.15 picked up at the farm in the mid-west. 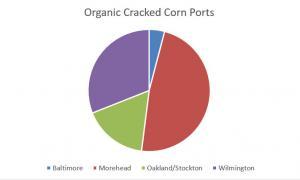