The Jacobsen is hearing that some consumers are covered for all of 2021, while most appear to be covered until the Q2. While organic corn prices have traded as slow as $320 per short ton on the east coast, they are offered closer to $335 on the west coast.

Organic chicken weight slaughter has rebounded sharply and has recaptured the linear trend, recovering from the lows seen in April. The uptick in the slaughter numbers by weight is a function of robust demand for organic chickens as well as a rebound from the closure of slaughterhouses during April when COVID swept across several plants. It appears that all of the slaughterhouses that were closed on the east coast have reopened. There are a few in the mid-west that are currently closed, none appear to be chicken slaughter operations. 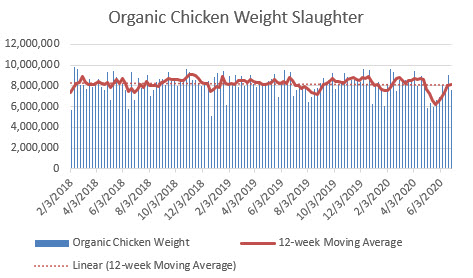