There is not much news to report with very few changes. There is still a large supply of raw fresh and wet salted hides and altogether, more hides than what is needed.

Good quality Buenos Aires wet salted heavy steers remain unchanged, but as said before, very limited demand, trading at about US$0.04 per kg.

Most tanneries work little for very few, real orders. Others, speculating for the end of the holidays in the northern hemisphere, are building some stock.

The Argentine government reported that Malaysian market was reopened for Argentine bovine chilled and frozen beef and beef giblets. Malaysian market has been closed since 2010 due to the modification of the Malaysian regulations on Halal Certification. Malaysia imports about 200 thousand tons of carcass equivalent (TEC) annually, mainly from India.

According to data from the Argentine Directorate of Economic Studies of the National Undersecretary for Livestock, beef production grew 4.22% during the first six months of the year, totaling 1.51 million tons of carcass equivalent.

The number is derived from the monthly slaughter and the average weight of the bovine cattle, reported by the National Directorate of Agricultural Commercial Control (DNCCA).

Many fresh and salted raw hides are being offered.

Good quality Buenos Aires wet salted heavy steers aren’t in much demand, trading unchanged at about US$0.04 per kg.

With the slowdown in business due to the holidays in Europe over the past few weeks, demand continues to be very weak.

Some tanneries have received a few TR nappa leather for boots orders from the East at about US$1.00 per square foot. Also, some luxury automakers have placed orders for automotive crust leather.

TR1 from Mato Grosso remains unchanged at about US$0.50 per sq.ft.

Slaughter continues to be minimal.

Good quality of heavy wet blue hides continues to be scarce, which encourages some producers to try rising their prices, unsuccessfully so far.

TR1 from Mato Grosso remains quoting unchanged at about US$0.50 per sq.ft.

Demand is unchanged from last week.

The hides and skins exports report by the SECEX (Secretariat of Foreign Trade) of the Ministry of Economy, for the month of June 2020, registered the amount of US$48.4 million, which represents a decrease of 47% over the same month last year, when total exports were US$91.3million, and also a 12.6% reduction in relation to May, when exports were US$55.3 million.

Regarding the total exported in square meters, 8.7 million were shipped in June, down 36.9% over the same month of 2019, and 14% less compared to May, when the total was 10.1 million square meters.

Furthermore, Brazil exported 152 thousand tons of beef product weight in June, 32% more year-on-year and a record for the month. China had an unprecedented participation, capturing half of the shipments. In the first semester, Brazil placed 777 thousand beef tons to all destinations, also a record for the period.

Prices of good quality heavy wet blue hides TR1 from Mato Grosso continued unwavering from last weeks, quoting at about US$0.50 per sq.ft.

Demand is slightly picking up, returning to about 60% pre-pandemic levels.

Slaughter remains firm with all frigorificos working at full capacity, which makes it reasonabl to expect another record month.

Carcass prices are steady at US$2.50 per kg.

Beef export to South Africa was reopened after 12 years. This market was “abandoned” due to the foot-and-mouth disease at that time.

Good quality wet blue hides TR1 remain quoting at about US$0.50 per sq.ft., despite the pressure to push those values down.

Slaughter continues at a steady, but strong pace.

Carcass prices continue to rise, quoting now at US$2.50 per kg.

A great drought in the Paraguayan Chaco is affecting several areas of the country, forcing ranchers to move their animals to other regions, or selling them to the frigorificos to complete the fattening.

Good quality wet blue hides TR1 continue quoting at about US$0.50 per sq.ft.

Most tanneries of semi-finished and finished leathers are working only a small percentage of their installed capacity, which has forced the reduction of their workforce to a minimum.

There are mostly no leather orders. The only orders they receive, are at such ridiculous prices they cannot fulfill.

To make matters worse, the gelatin industry is reducing purchases from its usual suppliers, due to excess of offers, with new lime hides sellers at ever lower prices.

Now that all of the frigorificos are authorized to work, the optimism in the Saudi Arabia market is continuing slaughter at steady levels.

However, the operation of Frigo Norte has not been authorized yet. The resolution of the issue is expected to be this week, considering the great pressure from the 500 workers at the plant.

Carcass are quoting at US$2.45 per kg, with the possibility in rising a bit more.

There is practically no variation, as it has been already for several weeks, in the prices of wet blue leather. Good quality wet blue hides TR1 continue quoting at about US$0.50 per sq.ft.

Frigorificos fresh rawhide prices are quoting downwards from last week at about US$0.02 per kg.

Frigorificos fresh rawhide prices are quoting unchanged from last week at about US$0.04 per kg.

Frigorificos fresh rawhide prices are quoting upwards at about US$0.04 per kg.

The Shanghai Leather Fair for 2020 has been postponed and will now take place on August 31 to September 2, 2021.

There have been more reports that the furniture upholstery leather business is continuing to improve, but mainly for only a few very large tanneries in China. These tanners tend to buy very cheap and low-quality hides and wet blue because the leather price is under pressure.

The major buyers of American steer hides, the shoe leather tanners, are struggling to keep the tannery running every day because of the limited demand from the consumer.

In general, things seem to get better every week in China, but many have doubt that American hide prices will be able to increase throughout the remainder of the year due to many factors, but one being the high cattle slaughter numbers coming out each week in the US.

There isn’t much change with the offers from major American sellers.

A few tanners are still interested in purchasing more hides, but many of them do not want to pay higher than the last confirmed price.

The shoe leather business remains very quiet. Some tanners manage to receive a few new orders, but the leather price have even further fallen, which makes it almost impossible to make a profit.

The furniture upholstery leather business is improving, but a number of people have claimed that it is still tough because the leather price is under pressure. Due to this, most of Chinese tanneries have to buy very cheap hides or wet blue.

Quite a few Chinese tanners are holding plenty of hide stock. This stock was booked in February and March while hide prices were rapidly falling. The full inventory has remained unchanged, mostly because they do not have enough business to clear out these hides. At this moment, these tanners believe American hide prices will soon be under pressure again as a result of the very high, weekly cattle slaughter.

In general, the leather business in China is improving for some, but certainly not all tanneries.

There aren’t any significant changes in the European hide market. The demand for finished leather is still weak and tanneries are forced to work on small occasional orders with no possibility to plan the production for the upcoming weeks. During the last two weeks, many tanners explain their position to be as follows: “I am only purchasing hides for the lowest possible price, to increase my stock and possibly average down”. As one can easily imagine, only suppliers who need to get rid of fresh material are accepting to sell under these conditions. As a result, the price of all main European material remains unchanged, and the number of closed trades is extremely low.

The market is uncertain also due to the latest developments of the Covid-19 outbreak, being in some countries the medical situation seems to improve, while elsewhere like France, Spain and in the Balkan area, there is an upsurge of new cases. There is no doubt that as long as the coronavirus is around, the European economy is going to struggle and will not bounce back up. People will not go back to their pre-crisis spending habits if they still have the feeling that they are living in an emergency situation. For the moment, we need to be patient and hope for a quick improvement.

The European hide market has been extremely quiet over the last two weeks. Very few trades were closed, and the demand for finished leather remains weak in all key sectors. The impression is that the first signs of improvement we described in our last report have not been confirmed.

The main problem is that new cases of Covid-19 are reported in several EU countries. We are mainly dealing with small outbreaks and sporadic cases, all contained for the moment. Nevertheless, the market is not reacting well to this news: the hope to have a Covid-free Europe before the end of the summer seems quite unrealistic at the moment. Unless the situation suddenly improves, we will have to cope with it for a longer period, which creates tension and uncertainty, meaning tanners are unwilling to purchase new hides. In Italy, almost every tannery is working only a few days per week and with reduced personnel, most of which is currently on layoff. Several operators we spoke to agree that the outlook for the upcoming weeks is not positive and they are not expecting the demand to increase in the short term. When the industrial production and the retail sales will finally recover, the situation of the hide market will consequently improve – we hope this will not take too long.

Cow price is steady. Several operators report that low grade material is no longer available on the market, since the costs of processing are exceeding the revenue from the sales of the hides. 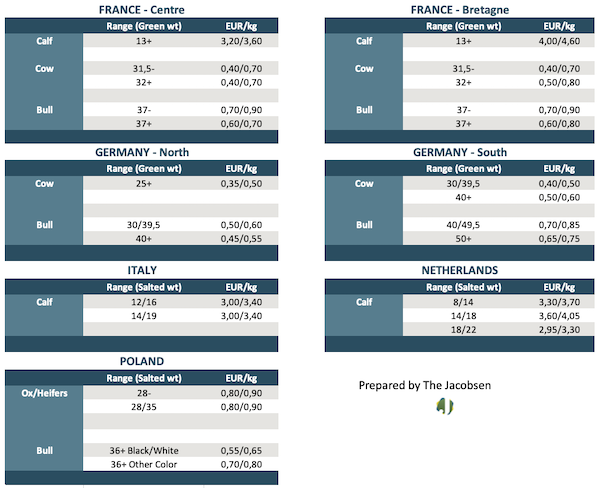 Europe is now entering the holiday period, so tanners are preparing for the summer shutdown. With orders running at about 50% and with buying to be mostly wrapped up until September/October, it may as well be considered an extended summer break for some. Prices are practically unchanged, and most hides are sold to either the Far East or within Europe. The Far East buying is partly due to the improved upholstery business and also partly due to speculative buying as tanners average down their inventory thinking that hides cannot become much cheaper. Not much change is expected over the summer months with prices remaining unchanged or possibly drifting slightly lower.

As we fast approach the summer shut-down in Italy more hides are being produced than are being sold.  Whilst most collectors are trying to maintain a forward sold position there were whispers that some of the large abattoirs were, if they could not obtain their asking levels, prepared to keep the hides and hope for a better market come September.  With production levels running at approximately 50% worldwide this would appear to be a dangerous tactic. In Asia tanners continue to buy if they feel the price is right and each week they have been successful in reducing prices by a dollar across the ranges.  With abattoir prices being close to zero on some items there is still room for prices to come lower over the coming weeks. Short term prices are expected to ease further, at least through the summer months.