Organic Soybean Prices Generally Decline Seasonally in September, Will They?

Organic soybean prices seasonally decline in the Q3 and September has historically been the lowest price of the quarter. During the past 4-years, the average price of organic soybeans picked up at the farm has been close to $18 per bushel. Currently, prices are nearly more than 9% higher. The seasonals also show the prices begin to pick up in the Q4 despite the harvest, generally because most of the soybeans byproduct that is consumed is imported. In its latest balance sheet, The Jacobsen reports that 67% of the organic soybean/soybean meal consumed is imported. 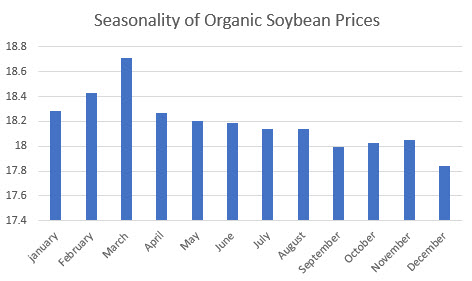 COVID-19 in India is Still an Issue

One of the issues is that India has yet to return to normal as economic malaise has set in. The country reported that its economy contracted by nearly 24% during the Q2 on an annualized basis. There attempt at shutdown to mitigate the spread of COVID-19 seems to have failed.

According to official statistics, the “shelter in place” orders in India in April whipped out 140 million jobs. Despite the country’s attempt at reducing the spread of COVID India is now recording more new cases than any other country. Nearly 80,000 new infections have been reported during the past 24 hours. An issue that could hamper the agricultural industry is that the spread of the virus has moved from cities to rural areas where soybeans are harvested.