Organic food-grade soybeans that are used for organic soybean milk have been experiencing a downward trend until the onset of the pandemic in March. You can see that the trend in the 12-month moving average has been downward sloping but appears to have bottomed in January of 2020. Since the trough, the 12-month moving average has rebounded nearly 5% since hitting a bottom in January of 2020. The rebound in demand for organic soybean milk, which has the largest sales value of any of the organic soybean food-grade byproducts, likely means there will be little to no spillover of organic food-grade soybeans into the feed soybean allotment during the new crop season. 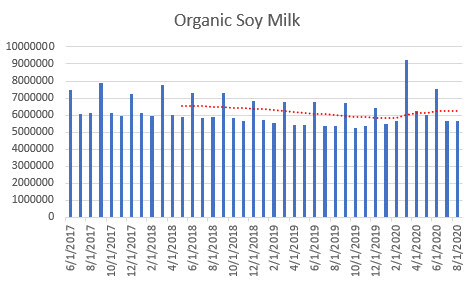