The Environmental Protection Agency (EPA) reported a reduction in renewable fuel blending during the month of August, falling for the first time in four months. Renewable Fuel Standard (RFS) credit generation of 1.58 billion credits declined three percent from July but was 50 percent above the April low of 1.06 billion.  Volumetric consumption of 1.44 billion gallons was three percent below July output and six percent below August 2019 output.  Consumption was mixed for the four primary D codes.  Ethanol and the Advanced Biofuel category experienced a decline in demand, while biomass-based diesel and the cellulosic category moved higher.

Advanced biofuel demand pivoted lower as the supply of sugarcane ethanol and naphtha slowed during August. Sugarcane ethanol imports are 4.4 million gallons above the 2019 pace.  Ethanol consumption slowed in August as worries are beginning to resurface about oil demand.  The ethanol industry has been very efficient on managing supply.

D4 Biomass-based diesel generation seemed to brush of last month’s signs that output might be slowing.  Production advanced 1.2 percent from July.  Producers The Jacobsen talked with, indicated they expected production to continue strong into October.  D4 Biodiesel consumption increased three percent to 185.5 million gallons, while D4 renewable diesel consumption edged fractionally lower to 63.8 million. The use of renewable jet fuel fell 95 percent below July to 63,855 gallons.  There were 249.4 million gallons of biomass-based diesel produced in the D4 category, generating 386.8 million credits. D4 biomass-based diesel production for the year is 1.84 billion gallons, accounting for 76 percent of the pre-pandemic mandate, and is 4.8 percent over 2019 production through August of each year.

Total renewable fuel consumption fell three percent in August and was four percent below August of 2019.  For the year, 10.64 billion gallons of renewable fuel have been consumed, generating 11.73 billion RFS credits. 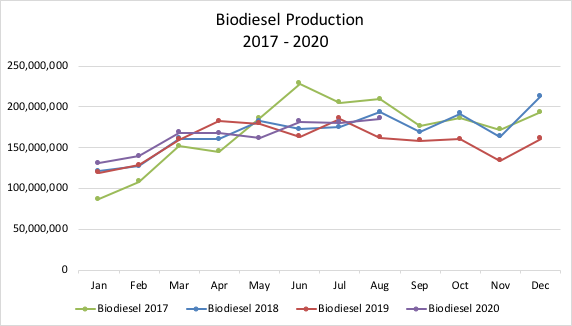 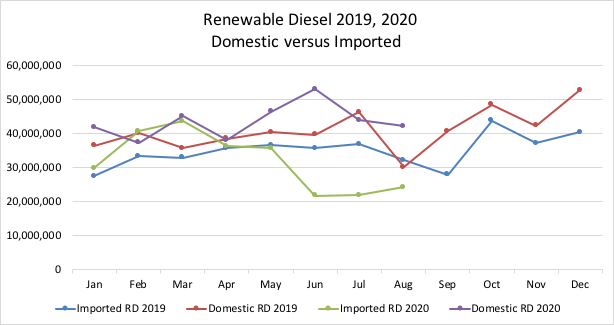 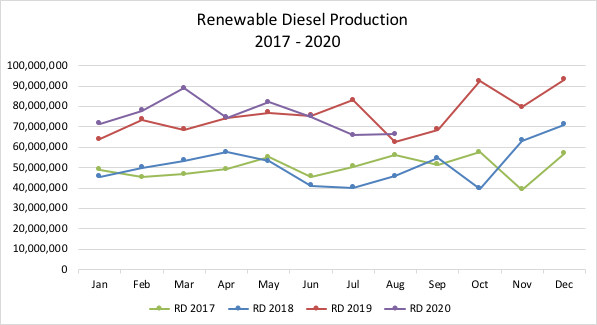 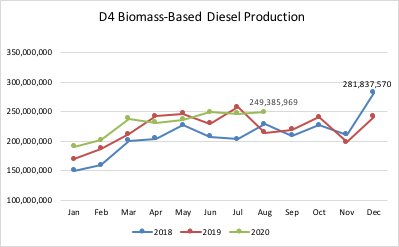 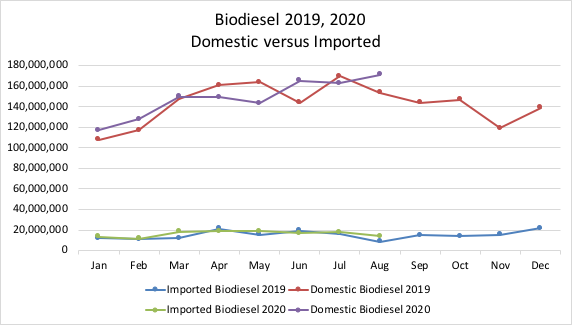