Soybean oil prices closed the day more than a penny per pound higher, gaining 7.4 percent in value for the week.  Soybean oil prices are 13.5 percent higher than they were a year ago. Heating oil saw strong gains over the week as well but was limited on preventing the bean oil/heating oil (BOHO) spread from advancing higher.  The BOHO gained 5.2 percent in value during the week, reaching its highest level in more than a week and closing the week at $1.31 per gallon.

With the BOHO advancing, the biomass-based diesel 2020 RINs appreciated five percent and closed the week at 79.25 cents, a two and half week high.  Ethanol 2020 RINs gained four percent in value for the week. California’s LCFS credit was down two percent this week and three percent below pricing a year ago.  The LCFS credit is feeling pressure from reduced gasoline consumption and increased renewable capacity forecast to be coming online.  Within the LCFS program, most of the deficits are generated on the gasoline side of the program with a majority of the credits coming from the diesel portion of the program.  Increased consumption of renewable diesel over the next several years will have a sizable impact on credit generation, providing the planned capacity additions arrive and there is enough feedstock to satisfy demand. 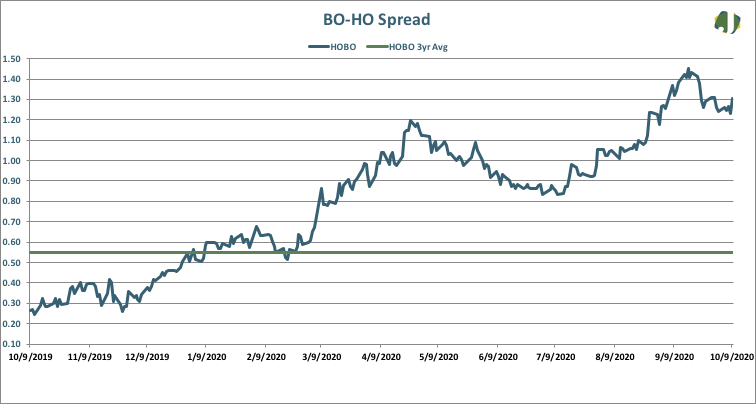