Organic corn prices remain stable hovering near the $8 mid-west picked up at the farm. Merchandisers say there is very little activity. The corn in the fields remains wet, and many farmers are waiting for mother nature to dry their corn before they eventually bring it to a dryer. The jury is still out as to whether the eastern mid-west will see substantially delayed organic corn or less organic corn.

Historically, organic cracked corn and whole corn imports dip in November, but new crop corn and carryover have handled any needs. This should provide an opportunity for organic corn stockpiles to ease slightly and prepare for new crop. If inventories of organic corn are unable to decline, you could see another leg down in organic corn prices especially if the harvest comes in stronger than expected. 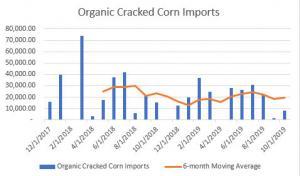