According to the EIA’s Weekly Petroleum Status Report, ethanol production increased 7,000 barrels per day to a 1.04 billion-barrel-per-day average during the week ending Feb 14, 2020. This follows last week’s 48,000 barrel per day decline. DDGS output moved fractionally higher and is 4.4 percent over levels posted for the same weekly period last year.

Gasoline demand increased 2.3 percent to 8.92 million barrels per day and is fractionally over 2019 demand for the same weekly period.  Ethanol stocks moved higher for the third consecutive week, rising two percent to a new all-time high of 24.8 million barrels.  Ethanol stocks are up four percent relative to this time last year. There were no ethanol imports this week. A continuation of sugar-cane ethanol to satisfy California’s Low Carbon Fuel Standard requirements is expected if the price of sugar is favorably low.  The rise in ethanol production caused corn demand to increase 104 thousand bushels per day. DDGS output moved in sync with ethanol production, rising by 0.7 percent for the week.

Ethanol output is averaging 1,059,000 b/d over the past three months, up 714 barrels daily from last week’s average and 30,462 barrels above average 2019 weekly production.  The ethanol blend rate slipped to 11.7 percent. Average year to date gasoline demand is 9.2 million gallons per day below 2019 average demand.

The estimated ethanol-processing margin increased five percent during the week ending February 14.  Revenue from ethanol and DDGS sales moved from $5.16 to $5.19 per bushel while the cost of corn was unchanged at $4.02 per bushel.  This allowed the margin to expand three cents to $0.58per bushel.  The estimated margin is 24 percent below levels from year ago. 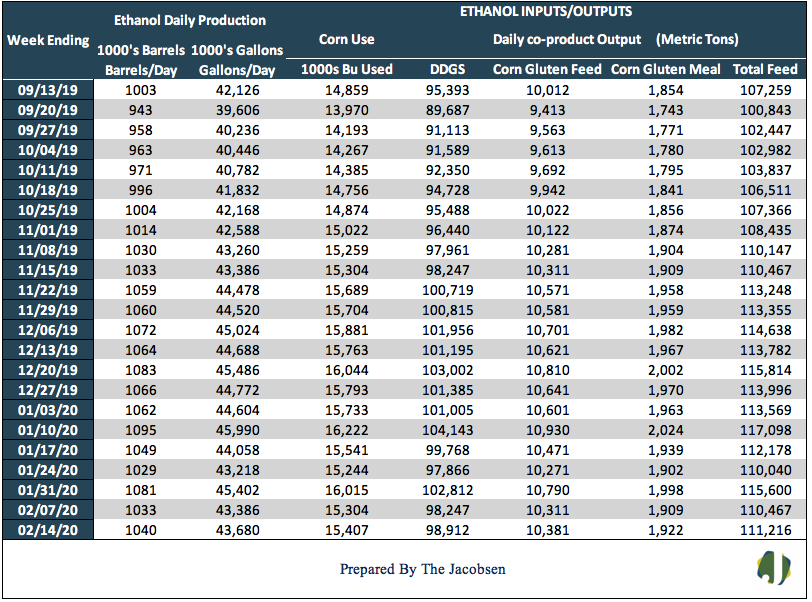