Interesting announcements from an unexpected source show that the nation’s trend for renewable fuels may be with LCFS programs instead of RFS.  This is an idea The Jacobsen had been advancing for a while, but having that idea mentioned in an earnings call by a merchant refiner was not expected.

Coming on the heels of the 10th Circuit Courts ruling that small refinery exemptions were inappropriately giving to three refiners, one CEO of a well known publicly traded oil company, announced that his company will need to find additional means to mitigate RIN exposure. He went on to say that LCFS programs like the ones found in California and Oregon are probably going to overtake the United States at some point and be the norm.  Between the recent Court ruling and the continued strength of LCFS programs, merchant refiners are being forced into capitulating from their historical stance on the RFS and looking for economic solutions to managing RIN exposure.

The CEO went on to say that in his opinion, RINs have nowhere to go but up. Since this particular company has excess of hydrogen production at two refineries, and the ability to convert selected existing desulfurization units to renewable diesel production, they are now in the early phases of possibly expanding to renewable diesel production and he feels they are well positioned to be at the front of the line as to opening up new RD production. He acknowledges that they are behind some of their peers and now needs to act quickly in order to protect assets that might be affected by the closing of the small refinery exemption loophole, and in an effort to mitigate future RIN liability. 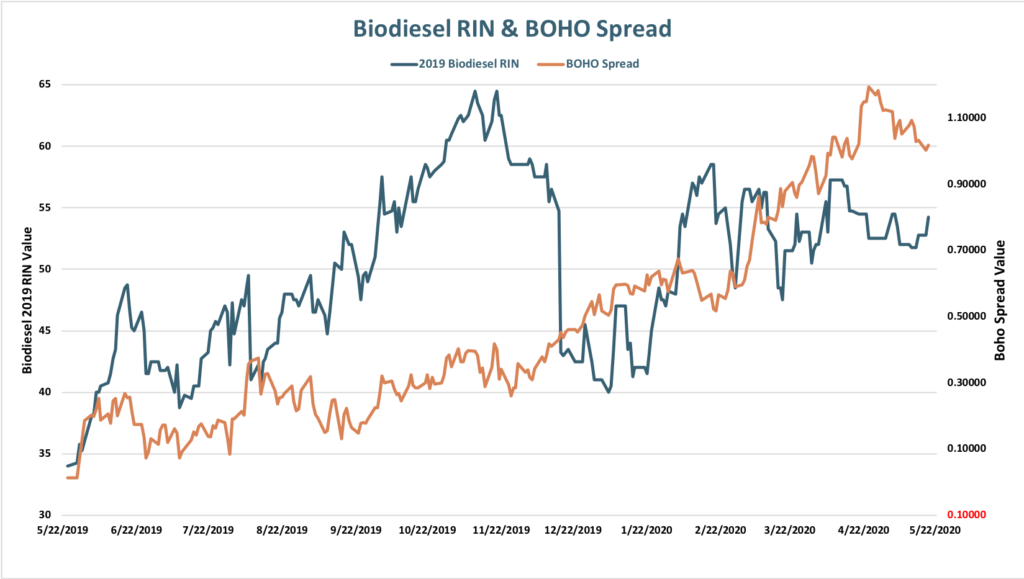 May 06 (Reuters)  UPDATE 1-INDONESIA TO DISCUSS HOW TO CONTINUE BIODIESEL PROGRAMME AMID FALLING FUEL PRICES – The economic affairs ministry was scheduled to meet on Wednesday to decide the government’s next moves to ensure the continuity of a mandate which requires biodiesel to have 30% bio-content (B30) made from palm. B30 is the highest palm-based bio-content in biofuels ever used. The government plans to launch the B40 programme between 2021 and 2022. READ MORE

Apr 24 (PV Magazine)  Kauai was 56% renewably powered in 2019  – The island of Kauai’s journey to 100% renewable power reached an important milestone in 2019, with the Kauai Island Utility Cooperative (KIUC) reporting that for the year, the island achieved 56% renewable energy generation  READ MORE

Mar 30 (The Washington Post)  Trump administration to finalize weaker mileage standards, dealing a blow to Obama-era climate policy – The revised mileage standards will affect drivers across the country, partly by lowering the sticker price of new vehicles but also by causing fuel costs to rise over the long term. It also would release an additional 1.5 billion metric tons of greenhouse gas emissions into the air over five years, according to an analysis by the Environmental Defense Fund – equivalent to the pollution released by 68 coal plants operating during that time. ReAD MORE