US Auto Exports During April 2020 & the Recession

US Auto Exports During April 2020 & the Recession

Automobile exports from the US fell significantly in April of 2020 and it is reasonable to expect that lower sales will continue in the upcoming months. Over the past four-years, US auto exports have remained consistent, with an average of $13.1 million in exports per month. March of 2020 reported the first drop of 14.7 percent from the prior four-year average. The following month, April brought a record low of a 65.8 percent decrease from March.

When analyzing another time period of a bear auto market, the year of 2008 remained consistent with exports of $10.1 million per month. December brought the first significant drop and January of 2009 brought the lowest export report of the Recession, 46.5 percent down from the 2008 average.  Through January of 2009 into December of 2009, the market increased 64.8 percent. However, it wasn’t until January of 2011, did the US exports surpass the 2008 average of $10 million per month.

In comparison to our current market situation, it is plausible that US monthly auto exports will remain at sharply lower numbers, but history and a reopening of the economy suggest that slow road of recovery could happen through the remainder of the year, provided there are no more shutdowns. Unemployment was recorded at 14.7 percent on April of this year, but May has shown a slight improvement to 13.3 percent. These ten-year record high rates have contributed to limited consumer spending, but the positive growth between these two months show a sign of progress. 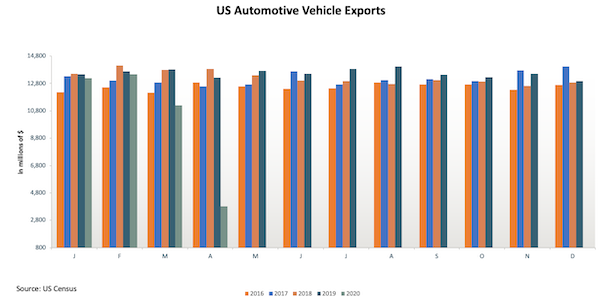