Weekly credit volume declined in the third week of June. Volume of 161,058 was 38 percent below last week’s volume and 55 percent below the average weekly volume for the year.  June has been a slow month for credit trading but is seeing more volume transacted than in May. The average price paid per credit increased $0.67 to $205.31. There were 23 transactions, 12 were type 1 transfers of 71,095 credits and 11 were type 2 transfers of 89,963 credits. Type 1 transactions are trades executed within 10 days of a transfer agreement. Type 2 transactions are executed beyond 10 days of a transfer agreement. Type 1 transactions give a somewhat clearer indication of where the market is trading since Type 2 transactions do not provide a date the agreement was entered into. The weighted average price for type 1 trades was $207.63, which was $2.32 over the average price of all trades. Second quarter volume is 40 percent over first quarter volume and 172 percent over Q2 of 2019.

Trading was heaviest on Wednesday with 27 percent of the volume transacted. The highest average daily price was $209, which occurred on Tuesday. The price range credits traded in narrowed from $187 – $216.50 last week, to $187 – $214 this week. The value of credits transacted totaled $33.1 million, down from $55.5 million last week. At the top of the range, 10,000 credits traded for $214 and 10,000 traded for $187 at the bottom of the range. Thirty-five percent of the transactions traded at a price of $210 or above, 59 percent traded at a price between $190 and $209.99, and six percent fell below $190. The value of this year’s credit transactions is 1.77 billion dollars, which is 106 percent over last year’s total of 858.3 million through the same weekly period. CARB has proposed to place a hard cap of $200 based on a 2016 base-year adjusted for inflation for the LCFS credit. This pending amendment is currently on schedule to become effective July 1, 2020 and will limit transactions to a price of $217.97 after the effective date. 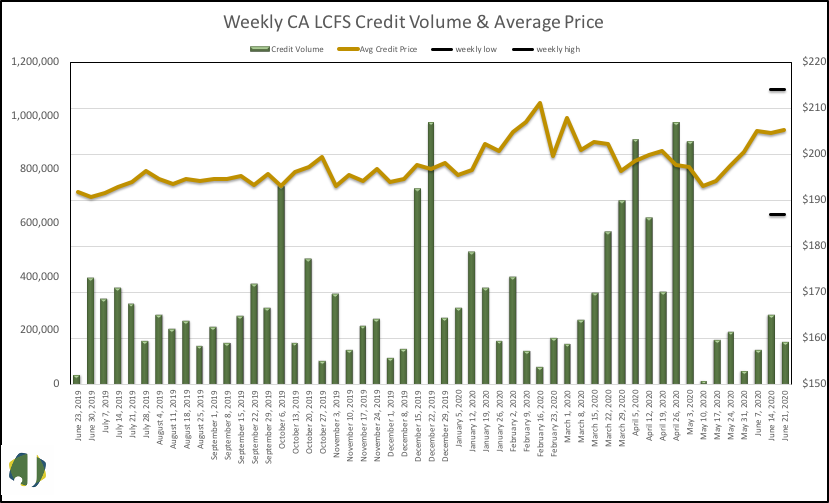 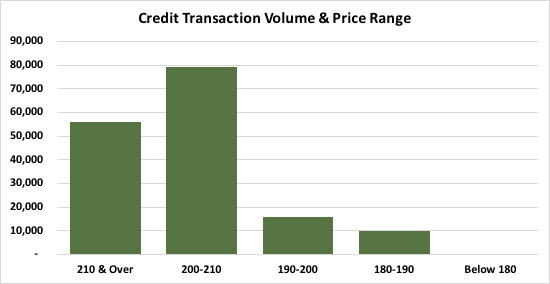 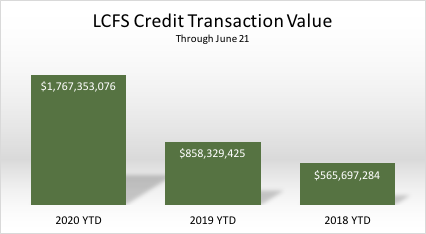