Oregon has pulled out ahead of neighboring California with premium hemp flower markets.  Cannabis producers in both states have sought to capitalize on hemp prices, but a glut in Oregon’s cannabis market was added motivation, when those prices fell to historically low levels.  California’s hemp program began after Oregon’s, giving Oregon time to establish some trade flows.  California will begin to capture some of the US markets as production of flower increases there, particularly if their cannabis industry is any indicator of future hemp flower markets.  There is also considerable extraction capacity established in the state.  Oregon has added more capacity over the past couple of years.

Export of US flower has been minimal to date, limited to small amounts bound for Switzerland via private transport.  The product is popular in Switzerland but in much of the EU, it isn’t allowed, nor practical as an export destination, in light of their .2% THC threshold.  The policy around the continent is diverse, with varying levels of tolerance for sales.

Italy had a thriving industry selling hemp flower as “souvenirs” or “collector’s items”, but this has since disappeared after prosecutions prompted a key ruling by their Supreme Court of Cassation that declared no cannabis flower legal to sell. The UK has chosen to ignore it for the most part, but across the channel, you’ll find it forbidden – officially – in France, Germany, and even the Netherlands.  Even where forbidden, it is bought and sold on the black market and in some shops.  Other countries like Belgium and Luxembourg tax it, like tobacco.

Some material has been exported to 1% THC country Switzerland from South America, like the  1000 lbs. exported from Uruguay in July for about $82/lb.  This is low pricing compared to US domestic markets, representing the lower end of our reporting.  Current policy makes European flower markets less accessible than they are for extracts, which can be exported more easily than cannabis flower, regardless of THC content.

US demand is unknown, but using Colorado’s adult use cannabis markets as comparison, that state consumed 232,056 lbs. of Adult Use flower in 2019.  Colorado is our 21st most populous state, accounting for 1.74% of US population, with its ~5.75 million residents.  California is by far the most populous state, with upwards of 40 million residents.  If we assume for this exercise that hemp flower demand per capita matches that of cannabis in Colorado, then California demand for smokable hemp flower would exceed 1.3 million lbs.   This is based on Colorado’s numbers; California consumes more high THC cannabis per capita.

Top 5 states CA, TX, FL, NY, and IL represent 36.84% of the US population, with 123+ million people.  These top 5 states account for over 4.8 million lbs./year of theoretical demand  in aggregate for hemp flower.  One argument supporting this level of demand is the vastly greater marketing opportunities found with hemp flower, in spite of state bans.   Colorado’s roughly 575 Adult Use stores are eclipsed by the marketing reach of the internet, and many times the number of brick and mortar locations across the US.  One has to account for cannabis tourism and black-market sales for any thorough analysis using these state’s numbers, as well as inconsistent demand from state to state, but these numbers nonetheless present a believable demand picture.

Oregon’s hemp acreage for 2020 was recently revised to 25,273 acres. Using 1800 lbs./ac. as a theoretical average yield and designating 10% of that crop as premium smokable hemp flower, we see theoretical production of ~4.5 million lbs., roughly matching the demand for the top 5 US states.  Jackson County purportedly has 6300 acres permitted in 2020, and at a generous planting rate of 75% of that acreage, we see 4725 acres with an overall yield of 11.3 million lbs., using the same yield average as above.  Assuming 20% of this crop made the cut for premium flower markets, Jackson County could produce over 2.2 million lbs.

Weather for Southern Oregon has been ideal this summer overall.  In a Southern Oregon Hemp Growers webinar hosted by Oregon State University Tuesday night, local NOAA meteorologist Ryan Sandler presented the long term forecast, calling for dry weather.  He noted that the Medford area has seen an incidence of 2 consecutive days of rain in September only a few times in the past 100 years.  Last year the area experienced a freak storm with hail and heavy downpours, but also had wet weather persist for longer periods than is typical.

“We definitely had many reports of mildew at the end of the season last year. The OSU Plant Clinic in Corvallis identified the fungus as botrytis in several cases, but it’s possible there were other causal organisms in some fields as well. Very little is known about botrytis in hemp, but we can look to other crops for some hints about the disease.

My guess is that a key to botrytis infection in the Rogue Valley is the duration of plant wetness, particularly flower wetness. Looking at some studies in winegrapes, very little infection occurs when the grapes are wet for 3 or 6 hours, but with 12 or 24 hours of wetness, the chances of infection increase dramatically. Last year, we had a few days of rain in a row in the middle of September. That’s pretty early for us to have that type of wet weather. With flowers beginning to fill out at that time of year plus a few days of rain, it’s easy to imagine that the buds got wet and stayed wet for well longer than that risky 12 -24 hours.

It sounds like this fall may be drier than last year. Hopefully that’s the case because there’s work to be done to be able to give good science-based recommendations for what to do if there is a prolonged wet period coming up in the forecast.”

Oregon weather varies from region to region, something other commodity producers take advantage of.  Data show that the Rogue Valley will not likely experience any significant rainfall this month, and the wider Emerald Triangle that includes Northern California will also trend dry.  If this is the case, from a supply perspective, we could see as much as tens of millions of pounds of flower harvested over the coming ~8 weeks.

These new flower markets will not likely absorb this year’s production of hemp flower, making marketing relationships pivotal to producer’s success.  As discussed in the September Forecast, hemp flower markets are likely to see falling prices on this year’s production, and many producers may be eager to move crops too soon after harvest.  The theoretical demand numbers are annual numbers, making storage paramount, after proper drying and curing. 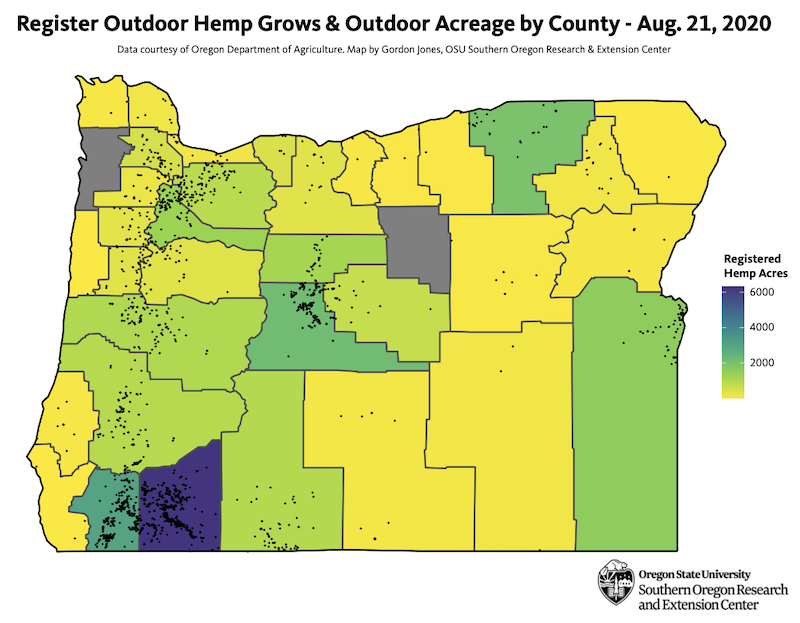