US Majors Join Merchant Refiners in Rush to Renewable diesel

Big bets are being played out across the oil sector with a focus on the West Coast.  Renewable diesel margins and the dollar per gallon federal blenders tax credit has oil companies looking to reposition underperforming assets into renewable diesel as California aims to phase out conventional diesel on its roadways by 2030.

CVR, is transitioning from a very anti-RFS stance to one that is slightly more neutral.  Not that they wouldn’t be happy to see renewable fuels disappear, but since that is not likely to happen, they are moving to a more proactive position that will reduce their RFS burden.  Having at least one underperforming asset, they plan to aggressively transition the unit to produce renewable diesel. The schedule calls for it to be up and running by July of 2022.  This will allow them 18 months of guaranteed production that will be able to capture the blenders tax credit of one dollar per gallon. Their feedstock of choice will be soybean oil.  It is widely available and amongst the easiest to process. Their market will be California, home of the Low Carbon Fuel Standard, and even when running a higher carbon feedstock like soybean oil the LCFS credit is still desirable at 85 to 96 cents per gallon.

Phillips 66, Marathon, and Chevron all have plans to enter the market, joining operations already producing like BP, Sinclair, and Valero. Capacity is expected to rise noticeably in the next several years as the new players enter and the already established companies work through expansions. Domestic capacity may move from just over 500 million gallons in 2020 to perhaps 3.7 billion by 2025. 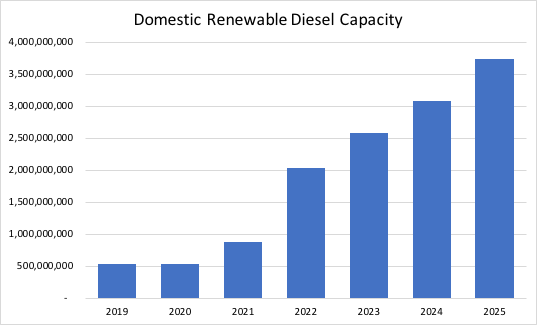