COVID has created a wave of change within the industry and the ripple effects seem to be stretch in many directions.  When the pandemic hit, the first shoe to drop was the price of oil, which collapsed from $32 per barrel to $12 in just over five weeks.

Ethanol production was quick to slow, and output rapidly declined from over one billion barrels per day to 537 million over the next five weeks. This caused a drastic change in the availability of distillers’ corn oil (DCO), typically the second most used feedstock in US biodiesel production. DCO availability became scarcer and its usage in biodiesel production moved from 145 million pounds in March to 84 million by May.

Transportation fuel demand plummeted, and less people were eating out.  With restaurant operations down, the availability of used cooking oil (UCO), another top biodiesel feedstock, shrank.  UCO use in biodiesel production fell from 103 million pounds in March to 43 million pounds by May.  These were just a couple of the lower carbon intensive feedstocks that saw supply and use narrow.  Tallow and poultry fat also saw usage rates in biodiesel decline.

Soybean oil (SBO) was on the other end of the spectrum.  SBO has always been the biodiesel industry’s most used feedstock, typically accounting for over 50 percent of all feedstock used.  Around March, SBO stocks were plentiful, nearly two billion pounds of soybean oil were on hand and the season’s soybean crush was operating at historic highs.  At the onset of the pandemic, the price of soybean oil was trading for just under 26 cents per pound at the Chicago Board of Trade. 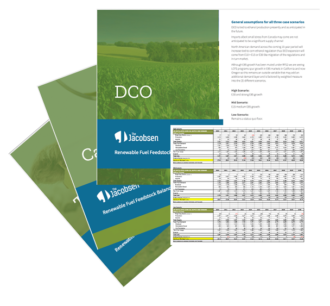