Organic turkey slaughter hit an all-time high in the week ending October 31, according to The Jacobsen. Slaughter numbers generally rise ahead of the last two weeks in November, as the market prepares for Thanksgiving. The question is whether the pandemic will increase organic turkey sales. The uptick in slaughter numbers tells The Jacobsen that the market believes this year will be a blockbuster. Retail sales of organic turkey have increased during the pandemic and with most of the organic sales of turkey sold at supermarkets and big-box stores, the uptick in COVID is likely to increase organic turkey sales. 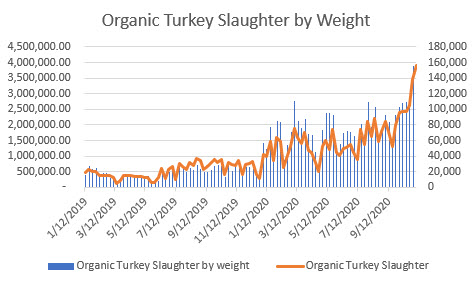