Despite the downtick in non-GMO soybean meal prices, demand at the retail level for non-GMO proteins continues to rise.  Non-GMO milk sales, which make up the largest component of non-GMO dairy sales, rose 17% year over year in October according to The Jacobsen. For the 8-months ending October 2020, non-GMO milk sales have increased more than 24% year over year. The trend continues to be upward sloping and the recent spread of the virus during the fall is likely to generate more purchases at supermarkets further buoying non-GMO milk sales. The upshot is despite the continued demand for non-GMO dairy, the rally in conventional soybean meal is generating a cost issue for dairies that is weighing on price premiums. 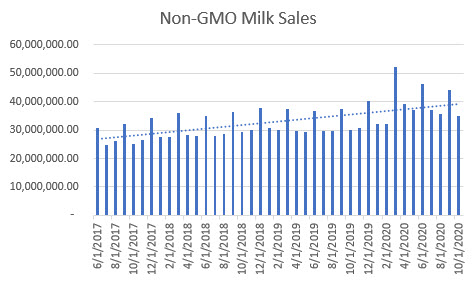